My daughter has been fascinated with death lately. It is a normal, healthy fascination brought on (I think) by the one year anniversary of my father-in-law’s passing. I wrote about it here if you want to check it out. I really miss him. Every day on our ride to school, she asks me so many questions. “Mama, what do angels eat? How is there enough room for all of the angels? So many people have died they’ve got to be close together.” Questions that I had to be creative to answer.

She asked me this week if we could go to a cemetery because she wanted to see where people’s bodies are. I think she wanted reassurance that they didn’t turn into zombies or vampires or something of that sort. Plus, her teacher did a fabulous job of talking about Veteran’s Day. She wanted to see where soldiers were buried and “respect” them.

I don’t do very well at cemeteries. I cry. The ugly kind of cry. Not for the people who’ve passed but for those who are left behind.

I am trying really hard to answer the girl’s questions when they come up. It is important to me that she feels comfortable asking me anything. I’d much rather she come to me than learn everything via wikipedia. I want her to know that death is a natural part of life and that it is okay to be sad. I don’t know why, but when I was younger I somehow got the idea that it wasn’t good to be sad. If I was sad, I was being bad in some way. Don’t ask me where I learned that because I have no idea. 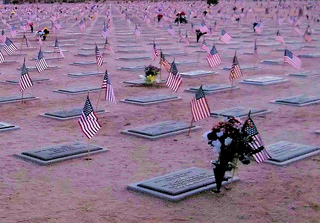 Anywho, I did some research and found a cemetery near us. It looked sort of like this one, but it had more grass and some trees. I didn’t even think to get a picture of it, but you get the idea. We talked to her about how to be respectful and peaceful during our visit and went on our way.

It was a beautiful cemetery. That seems like such a contradiction to me, but it was. There were flowers on almost every headstone and wind chimes and green grass. It was peaceful walking through it. If there were flowers out of their vases, the girl would place them back in. If there were no flowers, she would “respect” them by putting pine cones from the trees next to the names of the departed. She’d touch the white veteran circles that were placed on the headstones and said thank you. It was the sweetest thing ever.

The girl was a little disappointed that they didn’t have headstones like the ones you see in scary graveyards so we wandered around and found some in the very back of the cemetery. All was going well. The ugly cry wasn’t going to show itself to the world. I was definitely teary, but that was about it. Until we came up to a 30 day temporary headstone. It was surrounded by flowers. You could tell that the person who was buried there was loved by many. Curious, I leaned down to see who the person was.

I shouldn’t have. The marker was for a young lady born in 1994. She passed at most 30 days ago. She was the same age as my first group of sixth graders are now. A senior or just recently graduated. So much life left to live. There was a picture of her in a cheerleader’s uniform– you know, the one where they lay on their stomachs and have their legs up, pompoms in front of them. She was smiling brightly, her blond hair in a ponytail. I could imagine her jumps when her team scored.

That is when the ugly cry started.

The best thing about my daughter is that she wasn’t fazed about it. She asked me what was wrong. I told her that I was sad for the people who lost their family members. She looked at me and told me that crying was okay, grabbed my hand, and pulled me to the next headstone that didn’t have any “respect.” She solemnly placed the pine cone she had in her hand next to the name, turned, and smiled at me.

I couldn’t have said it better myself! I have hit the 2 week mark. I like my story, but it seems to have stagnated in my brain. My inner editor is so loud right now. If you’re participating in NaNoWriMo this year, then you’ll know exactly what I’m talking about.  About two weeks ago, before this all started, we were all filled with both excitement and dread.  We were all going to write our own novels and reach that goal of 50,000 words.  We didn’t know how, and many of us secretly doubted that we could do it.  Then week one kicked off, and we were wrapped up in our stories and the exhilaration of creating.  Word counts soared, and we all accomplished so much in that first week. And then week two hit. Suddenly, I’ve been finding my job and my home life to be twice as taxing, and even when I have plenty of inspiration for my story and I know exactly where I want it to go, it’s hard to find the time and the energy to sit down and write it. …