So, I feel really unobservant right now. I was doing some research on the Warm Bodies movie. On the IMDB website, there is this wonderful little bit of trivia.

It makes complete and total sense. I can’t believe that I didn’t see it. I shall have to hang my English teacher hat up for the weekend. I am not worthy of it. Before I hang it up in shame, though, this novel might be a way to get my kids who are obsessed with zombies to like Romeo and Juliet more when I teach it in May. Hmmmm…. the wheels are turning already.

I toyed with the idea of reading this book since I saw the trailer for the movie. I knew that it would be an easy read and I didn’t want to spend the kajillion dollars (okay $10, but still!) to buy it– especially when I knew it would only offer a couple of hours of entertainment.

After reading a review by my friend Amy, I decided that I would read it. I took myself to the library and requested it. I waited. And waited. It arrived for me this morning; I picked it up at 9. It took me about two hours to read.

They were two of the best hours I’ve spent with a book in a long time. That really surprised me. I wasn’t really planning on liking it. In fact, I was completely prepared to hate its guts. I figured it would be just another zombie book in a long line of zombie books.

This one had heart. R, the narrator, is one of the most fully fleshed out (har-dee-har-har) zombies ever written. Because the book is written in first person, we are allowed inside of R’s head and follow his thoughts as he develops through the book. It is this character development that I love. Through his relationships with the Living and the Dead, R becomes whole again. I never thought I’d end up rooting for the zombies.

I am planning on purchasing this book. It is going to stand up to multiple readings. I am sure that there are nuances that I missed the first time around.

View all my reviews

My daughter and I went to see the movie Brave on its opening day. The first time I saw the trailer, I’ve wanted to see this movie. Even more than I want to see Magic Mike! Inorite? Whodathunk? There’s not even a hawt guy in it (Oh no! I seemed to have slipped into teen-speak right there. Ops. I must be missing my little rapscallions. Apologies, dear non-judgemental readers.). My daughter wanted to see it even more than I did. She would ask to see it every time she saw the movie trailer. We went. We loved it. We wanted to see it again. The girl usually tells me about all of her favorite parts of movies that we see. She essentially retold the entire movie. It was good. If you haven’t seen it, you should.

However, that is not the point of this post.

I started doing some research after the movie to see what others thought of it. I was shocked at some of the responses I found. Many blog posts and articles that had a feminist slant bashed the movie. Here I was, thinking that Merida was a fabulous alternative to the typical swoon-and-wait-for-rescue princess. She takes matters into her own hands. She’s brave, strong, and determined. Merida can take be victorious when faced with danger and stands up for what she believes in. In essence, I loved her and was excited when my daughter began to emulate her.

Apparently I had it all wrong. There are so many things wrong with Merida.

Part of my frustration is that this is a movie in which a young girl stands up for herself and solves her problems with a little help. Isn’t this how we want our daughters to behave? Why in the world should this movie aimed at children be expected to change the world for women everywhere? Let them be children for a while. I was allowed to do so and I turned out okay.

One of my students recommended this book to me. He is what we call a “reluctant reader” so I was excited to read it. I don’t know how to tell him that I did not really like it much. The fact that it took me ten days to read is a testament to how I had to drag myself through it. He kept on telling me that it would get better, but I never found that the case. 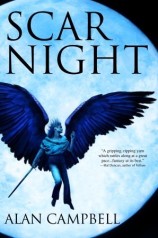 The world of Deepgate is a dark one. I’m all for dystopian societies. Usually they are the settings for my favorite books. The description of the city was detailed to start out. There are chains everywhere, supporting buildings over the Abyss. I never quite figured out what was holding the chains up, but maybe it was because I didn’t read closely enough. I really didn’t care. The problem that I found with the explicit detail is that it felt like a broken record to me. Just as the story started revving up, there was a description of the horrible living environment. It was more distracting than helpful.

Campbell jumps right in to the story without much exposition. Normally I like that, too. However, he also jumped in with a completely different vocabulary with no explanation of what the world-words meant. I guess it is a good exercise in contextual reading. I spent the first few chapters trying to figure out exactly what was going on and why it was going on. Characters were tossed in as if the author expected us to already know who they were. I kept on checking to see if this was a book 2 of a series.

The main characters were superficial. There was no depth to them. Campbell kept hinting at a deeper story, but never told it. I know that this is a method to increase anticipation and interest in a novel. The thing is, you’ve got to stop being a tease and give the information.

The first book in a series should make you want to read the second book. I just let out a sigh of relief when I was done, ready to move on to a more interesting book and forget that I ever read Scar Night.